For my first column, I'll write about the Stanley Cup Finals. Now I will say, I expected the Flyers to be out in the 1st round. I completely underestimated the team, of which many thought would be here at the commencement of the season. My bad. But to claw back my dignity, I picked the Blackhawks to be here at the beginning of the playoffs. So, I was half right. If you did pick the Flyers to be here at the beginning of the year, but went back on that after you saw how they were playing down the stretch, I still give you credit (some). But now, onto my predictions.
Both teams are playing extremely well coming in. The Flyers have been knocked down more than any team I have seen in the playoffs ever, and yet they always counter-punch back. This is the lowest seed to make it to the Finals since the 1998-99 Buffalo Sabres; they were a 7 seed too (His skate was in the crease). The Flyers have everything clicking right now. They're scoring, playing great defense, and can pick any goaltender they want, and he'll post a sub-2 GAA. They are doing everything right, even if a poor defender takes a puck to the face, and comes back as good as prior to the incident. Chris Pronger was brought in to agitate on defense, and that is exactly what he's doing. He shut down Kovalchuk, Savard, and Cammalleri as well, all premier scorers in this league. They can score, but better, they can agitate like the Legion of Doom, and the famed Broad Street Bullies. The seed is a misnomer. They're a 7 seed playing like a 1 seed.
The Chicago Blackhawks were expected to be here. That doesn't mean they can't surprise a bit as well. They payed a steep price to bring in big scorer Marian Hossa from Detroit. Even though he didn't play a game until November, he stilled scored like no one else. They are getting production from everyone, even Dave Bolland (who?), who shut down the Sharks in their last series. And, they can take a hit, like Duncan Keith who lost 7 teeth and still assisted on the game winning goal in Game 4, scored by big Dustin Byfuglien. They are playing just as well as they Fly guys, maybe even slightly better, backstopped by scoring from everyone, great D, and the brick wall better known as Antti Niemi, who has been shutting everyone down.
These two teams are almost evenly matched, but I'll let you in on a little secret. The Hawks have won 7 straight on the road in these playoffs. Even though Philly has lost once at the Wachovia Center in the postseason, the Hawks were facing the same stat against San Jose, and won twice in the Shark Tank. Tough thing to do, that is. Now that the Hawks can win at home, and you'd think 22,000 fans, maybe more, would provide that much sooner, this series looks to be slightly in the Hawks court. With the way the Hawks play on the road, the Flyers are looking like a tougher pick, even though the teams may be pretty evenly matched. The Hawks have the grit of a guy who just lost 7 teeth, and turns out, they have one! That will spur them on. 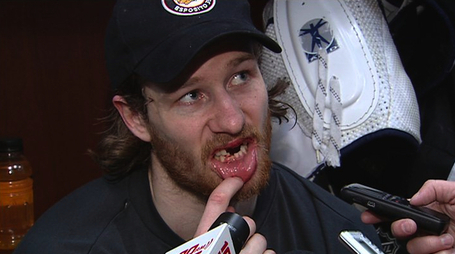 Prediction: Hawks in 6
Posted by Matt Lichtenstadter at 4:25 PM