A Dab to Touchdown Dances

When Cam Newton scores a touchdown, he usually will give the ball to a Panthers fan in the crowd. Even after former Panther Julius Peppers tried to prevent Newton from doing so against the Packers, he found another ball to give to a young fan anyway. Before he gives a ball to someone who will then have a memory that will last a lifetime, Cam Newton likes to dance. Those dances may never top the Ickey Shuffle, but it's not the dances that have seemingly angered a few people. It's the fact that Cam is dancing, period.

A Tennessee mother took her nine year old daughter to her first Titans game on Sunday. She and her impressionable daughter bore witness to the horror of Cam's dance moves in person that put the game against the Titans out of reach. She sent a note directed at Newton after the game through the Charlotte Observer, and what is contained within is nothing short of amazing:

"Because of where we sat, we had a close up view of your conduct in the fourth quarter. The chest puffs. The pelvic thrusts. The arrogant and the 'in your face' taunting of both the Titans' players and fans. We saw it all."

She sounds like a Vietnam POW with "we saw it all". How could the FOX cameras even begin to capture the terror of a man celebrating his own accomplishments and translate it to the home viewer who isn't at the game? You don't know man, you weren't there. Of all of the possible bad things for a nine year old to view at a football game, Cam Newton's dancing is maybe tenth on the list, including being behind watching the Tennessee Titans play football. I wouldn't take a nine year old to see that in person; even on TV it's terrifying. And if Cam's "pelvic thrusts" offend you, here's another pelvic thrust that is far more terror-inducing:

That should bring night terrors to all sensible human beings. But, wait, there's more to this letter!

"I refuse to believe you don't realize you're a role model. You are paid millions of dollars every week to play hard a be a leader... With everything the NFL has gone through in recent years, I'm confident they have advised you that you are, by virtue of your position and career choice, a role model."

Whatever your life decisions are, I'm going to try not to follow in the footsteps of a man who ended up in a yogurt commercial. That's not an indictment of Cam in any way, or anything less than saying I wasn't gifted with the athletic abilities he has, but that's not my ultimate goal in life nor should it be for you Ms. Rosemary Plorin or your daughter, unless you have already posed for the fill-in pictures found in Hallmark picture frames when you buy them. And as for being a leader, Cam Newton lead Auburn to a national championship and the Panthers to two consecutive NFC South titles while also wanting to play the Sunday after he had a massive car accident. Leading a church potluck isn't really analogous, but also not on the same level of leadership, either.

"Some of the Panthers fans in our section began taunting the hometown fans." OH NO! Someone wants to celebrate their team doing well and did so by making fun of someone? That feels like it might be... entirely common! (On another note Ms. Plorin, I recommend not taking your daughter to any Jaguars-Titans games in Nashville. You thought Panthers fans had an edge...) "Many Titans fans booed you, a few offering instructive, but not necessarily family friendly, suggestions as to how you might change your behavior." And Cam's dabbing offends you more than those "not necessarily family friendly suggestions"? Apparently you want your daughter to take after those people instead of following Cam Newton's lead by dabbing (which in fairness isn't a terrible idea considering white girls shouldn't dab... ever, especially nine year olds).

"My daughter sensed the change immediately- and started asking questions." The first question should be "why did you take me to a Titans game instead of a Predators game you sadist?" "Won't he get in trouble for doing that? Is he trying to make people mad? Do you think he knows he looks like a spoiled brat?" I'll answer these questions, Ms. Rosemary Plorin's daughter: 1. It's the NFL, and surprisingly dabbing is one of the few touchdown celebrations you don't get flagged for, so no. 2. Yes, that's the point. You're perceptive for a nine year old. 3. If I was the QB of a team that had won 12 straight regular season games, I'd look pretty spoiled too.

"I don't know about your family life, Mr. Newton..." It's called Google. Use it. "but I think I'm safe in saying thousands of kids watch you every week." Yep. And they all started dabbing in Charlotte area classrooms on Monday, and everyone loved it! "You have amazing talent and an incredible platform to be a role model for them. Unfortunately, what you modeled for them today was egotism, arrogance and poor sportsmanship." What would Ms. Plorin have thought of the Ickey Shuffle, the Dirty Bird, or what the Miami Hurricanes used to pride themselves on doing after they scored touchdowns? Those might well have been acts of war. And this letter ends with one helluva closer:

"Is that what your coaches and mentors modeled for you, Mr. Newton?" Since Marcus Mariota will probably be fined by his new coach for celebrating after a touchdown, maybe he should be coached by Mike Mularkey, and none of this would have happened! Although, he probably would be nowhere near the QB he is right now. And, for the record, here is the current Panthers coach: 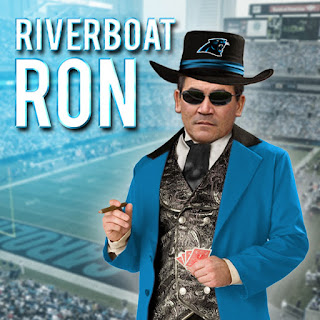 And this is the Titans current coach: 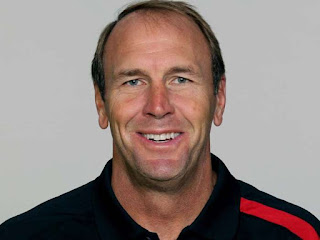 After all of the jokes are through though, why can't athletes celebrate on the field? Is there something inherent about the game that should force them to hold back raw emotions? We don't hear the trash talking and the like that goes on during games, and if we could no child would be allowed with 500 yards of a sporting venue... ever. Celebrating by dancing, giving a ball to a fan, jumping into the crowd, pretending like you're pregnant with a soccer ball, etc. is part of sports, and the way leagues have tried to scrub the personality out of the games and athletes themselves is flat out disturbing and wrong. Sports are fun, so let the people playing them have as much fun as those watching them. Let the athletes show their personalities for once. They are as human as those watching in the stands, so let them act like human beings and not like robots.

Watching Cam Newton is the epitome of football joy; the smile on his face when he plays is contagious and and infectious. But not to Ms. Plorin and her nine year old daughter I guess. Join in with Alabama fans in that corner.

But I do have one question for Ms. Plorin: What do you think of J.J Watt's comments after the Texans beat the Bengals? Anything? Bueller?
Posted by Matt Lichtenstadter at 12:35 PM